Posted on 10 May, 2017 Posted By: BASL AdminCategories: Annoucements

The first BASL event of 2017 was held at the offices of Penningtons Manches on 21 March.

On the panel were 5 BASL Board members who currently work or have worked in-house in sport:

No-one felt that the recent trend to recruit more in-house lawyers in sport would not continue, even though the legal function would typically be regarded as a cost centre, the value added being less obvious and perhaps more indirect.

All confirmed the truism that the principal benefit was being closer to decision-making and to the business generally. There was no hiding place but early involvement in the planning of a project would facilitate the paperwork exercise later down the line. The comment was made in parenthesis how important it was for external legal advisers also to have that familiarity and understanding.

A disadvantage was advising and operating in proximity to the media spotlight. This also meant that pressure points could be less predictable than in private practice. Because of media and other pressures, the turnaround period for advice was often brutally short. Incorporating a solution within legal advice was described as “critical”. Sticking to your guns was also described as important. One panel member alluded to the occasional need for a “cover your a*** email” in circumstances where your advice was not being followed.

The need for a broader range of legal skills was highlighted. Several panel members had discovered that their appointment had acted as a magnet in attracting work, not all such attention being welcome. Many had been asked for advice on wills, some on advice regarding house and/or horse purchases! All understood the need to outsource work to private practice. Some operated external panels, others did not. QCs were occasionally instructed in order to provide quality assurance.

All panel members felt that the current focus on the need for exemplary governance in sport was correct. (The Parliamentary Select Committee would appear to agree!) 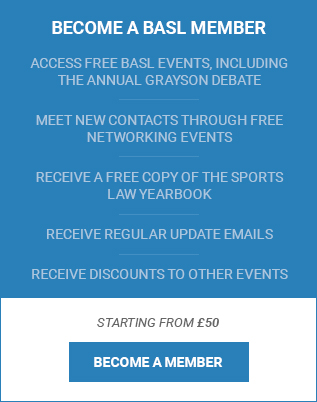