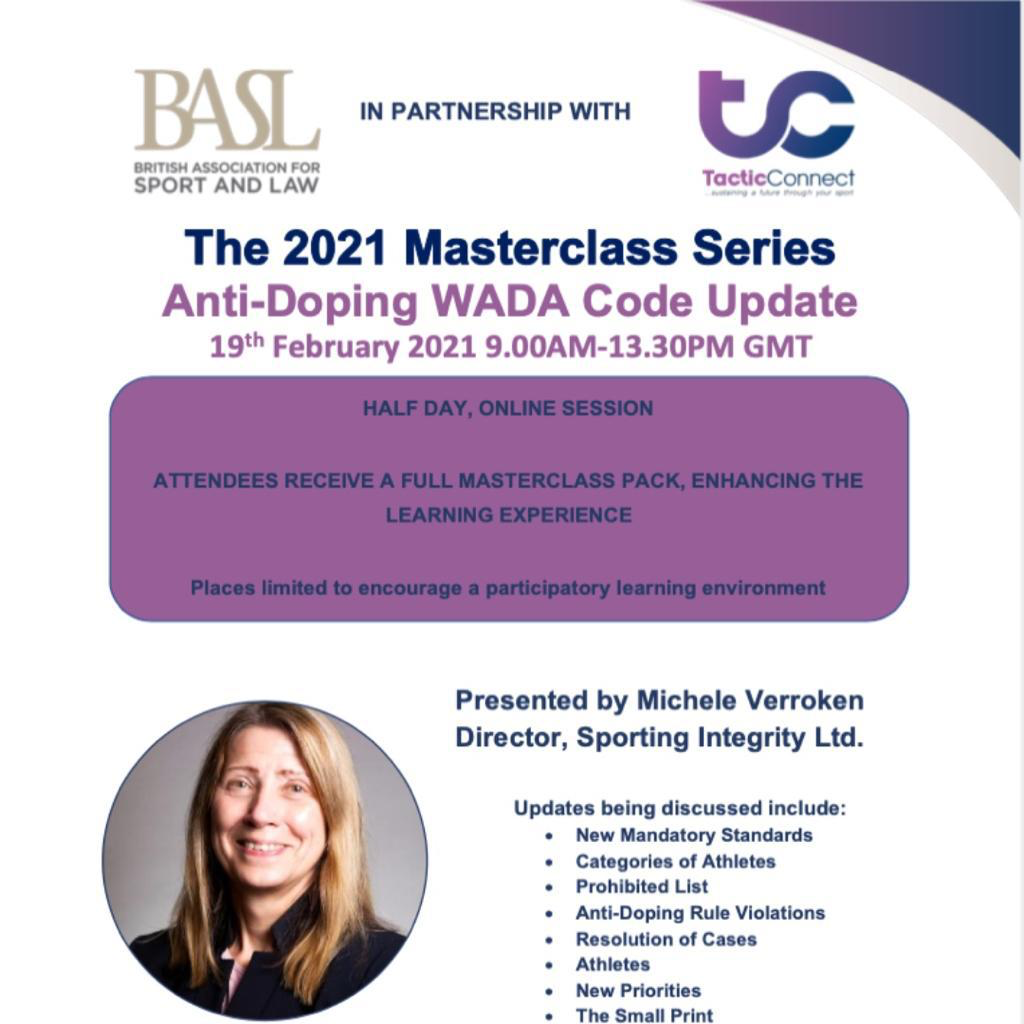 Michele Verroken provided a fascinating insight into the WADC 2021. The session began with an overview of the legal framework including the slightly bewildering array of actors involved. A very interesting section summarized some of the state law now in force, in Europe, Australia and most notably the USA’s Rodchenkov Act.  As Michele pointed out this has been described by Travis Tygart as a game changer.

The focus then shifted to some key amendments to WADC. This included “Substances of Abuse.” These are drugs “frequently abused in society outside of sport” and which are not regarded as performance enhancing. WADA has decided that the category consists of cocaine, ecstasy, heroin and THC. If a positive test is out of competition and the athlete can show ingestion was “unrelated to sport performance”, he or she can now expect a ban of as little as one month. Michele pointed out two issues: first, the athlete must complete an approved “substance of abuse treatment programme”; and secondly, the athlete may have to admit taking the drugs which could lead to serious legal complications for the athlete and possibly even more so for the supplier.

Another focus was on provisions which enable athletes seek a reduced sanction if they can establish that an anti-doping rules violation (ADRV) was due to a contaminated product. Michele gave one example where a disciplinary panel accepted that the ADRV may have happened due to water dripping off a ceiling into an open bottle. She also pointed out the risks and uncertainties of using CBD. She also highlighted that the Code now applies, albeit less strictly, to recreational athletes and that there are complicated rules about when an athlete ceases to be of national level and becomes, instead, recreational.

There were two short videos. One featured Marjolaine Viret who provided further analysis of the new substances of abuse rules. The other was given by Mathew Kaiser who spoke about the challenge of disproving that doping was intentional. He referred to various athletes his firm had represented, including the US longer jumper, Jarrion Lawson.  Lawson tested positive for trenbolone and was banned for four years. On appeal, CAS accepted that the cause was contaminated meat and overturned the ban. Despite this, Mathew pointed out that Lawson has suffered irreparable reputational damage due being provisionally and publicly suspended pending disciplinary procedure. The video interludes worked well and are an attractive feature of remote seminars.

The target audience was mostly solicitors and barristers who practise in the field.  Contributions from attendees added to the overall interest. Michele emphasized that lawyers representing parties need to be aware of the many actors involved in the disciplinary process, the detailed rules and their precise scope. In addition, the main point I took is that there still seems to be a gap between the rhetoric in the Code – greater emphasis on education and health of athletes – and the reality – that it is still very difficult for athletes to fight doping cases because of the presumption of guilt and the costs involved.

I have only touched on some of the main points. Michele covered many others including protection for whistleblowers, case management agreements and aggravating circumstances. The materials were extremely good. A brochure sent in advance included a useful list of resources. Great care was taken with the supporting slides. Within a few days I was sent the slides and a video recording of the session. The booking form was straightforward. All in all, a thoroughly enjoyable Friday morning which resulted in my understanding being greatly enhanced.